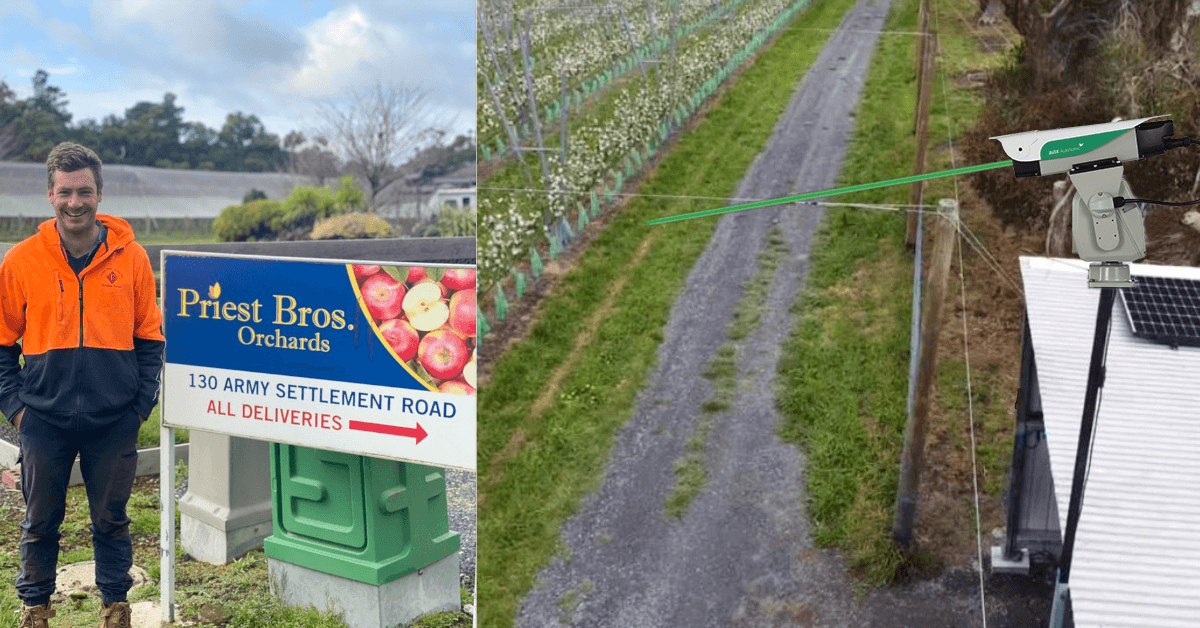 On the edge of the Gippsland region of Victoria in Pakenham, we find Priest Bros Orchards, a family-owned business that has been growing and selling apples for more than 100 years. The orchard has a large variety of apples planted on 80 acres, divided into three different fields.

Even though they have hail netting all over the orchards, the Priests were still finding birds damaging the apples throughout the year. They noticed that the birds were looking for small holes in the nets that are just big enough for them to enter and then find themselves a nice meal. The damage has been caused by a variety of birds, notably crows, lorikeets, parrots, blackbirds, and starlings. The pressure occurs all year but main pressure from February – June during the picking season.

Over a year ago Paul Priest, manager at Priest Bros Orchards, started looking for other solutions to their bird problem. He heard about the laser bird repellents at a fruit grower meeting he had participated in. He decided to do some trials with the small lasers first.

With the trials being very successful they decided to go for a more permanent and automated solution, the AVIX Autonomic Mark II. Laser bird repellent automatically projects the laser beam towards the birds. Birds perceive it as a physical danger and fly away to seek safety. They purchased their automated laser bird repellents through E.E. Muir and Sons, Bird Control Group’s distributor in Australia. E.E. Muir & Sons is an Australian-owned company since 1927, they provide superior services to help farmers protect their farms in an environmentally friendly manner and increase farmers’ profitability. The Priest family was assisted in their selection and installation of the unit by Emily Harrison of E.E. Muir & Sons Laverton North branch.

With the laser working on the farm for a year now, Paul could tell that the laser has been a big success: “one season in and it already paid for itself, a real return on investment.” Prior to the laser deployment, the losses due to bird damage to only one apple variety would exceed AUD 100.000 a year. That number is now reduced to only AUD 10.000. The damage to the entire orchard was many times higher. That is a reduction of at least 90% in just a year!

After such a successful year, Paul Priest was confident in acquiring another laser to cover the other part of his orchard. With the second Autonomic, they will be able to cover the whole orchard and protect it from birds.

Next to the big reduction of losses, Paul is also really excited about the user-friendliness of the Autonomic laser: “It is set and forget. No maintenance, you turn it on and don’t have to worry about it. You can go on with your daily job.”

Paul also adds that due to the different time slots, you have huge flexibility in when to use the lasers. You can set time slots for the times when there is the most bird pressure, so it won’t be used unnecessarily. Due to the good positioning of the system (high up), the orchard always stays a safe working place for the staff.

“One season in and it already paid out itself, a real return on investment.”

Do you want to learn more about how to protect your farm from birds with laser deterrents? Please fill in this form and tell us more about your business. A laser bird control expert in your area will contact you shortly about your quote – no string attached.