The Autonomics are deterring birds from table grape fields 24/7

Mirko Yakasovic is a well known producer of table grapes in the Valparaíso region, Chile. Mr. Yakasovic has more than 20 years of experience as a table grape grower, every year he estimates a production loss of minimal 10% caused by bird damage. In the recent season (December 2017 – April 2018) he decided to cover all of his 95 hectares of table grapes with the automated laser bird repellent for deterring birds away from the fields.

“The amount of bird presence is very dependent on environmental circumstances and the amount of food available, for instance in dry seasons there is less food available for the birds in the hills so they come down to the vines for the table grapes.

“We saw that the damage increased in the recent years, we know that the reason for this increase is that we have taken more and more of the bird’s habitat causing them to have less food, pushing them to eat our table grapes.” Mirko says.

At the beginning Mirko Yakosovic lent a Handheld laser to see if the birds would react to the laser. Mikro continues: “I wanted to see the effect of the laser on birds, I saw that it bothered the birds which made me decide to install the Autonomic and have it operational for the whole day.”

The 6 Autonomics were installed for deterring bird from Mirko Yakasovic’s 76 hectares of three grape fields. Mirko is happy with the results: “At the beginning I had doubts whether the birds would get used to it or not, I have over 20 years of experience as a grape producer and tried everything you could imagine for deterring birds from my fields. Birds got used to the most methods I previously used.

Compared to the other methods the laser simply works, giving me a peace of mind for 24 hours a day, 7 days a week. The birds do not get used to the laser and the effect stays the same, deterring birds and reducing the damage drastically.”

Mirko Yakasovic also has a few bird controllers who are there 5 days a week for deterring birds, but man labour wasn’t the right solution. “We just need something that works automatically 24 hours a day, 7 days a week.” – Mirko says.

Last year, before the Autonomics’ installations Mirko Yakasovic had a lot of damage in general. This year he had very little damage, especially in the areas closest to the bird controllers. The effect of the laser was less noticeable on the opposite side of the laser.For that reason Mirko decided to install another Autonomic for deterring birds.

Mirko compares the Autonomic laser to other deterrent methods: “The Autonomic is simply easier, more effective and gives me a peace of mind.”

Mirko has always taken in account the 10% production loss due to bird damage. Mirko adds: “In some grape varieties such as Thompson grapes the loss can easily rise to around 30% in the more isolated areas. Especially in these areas the Autonomic laser helped reduce the loss.” 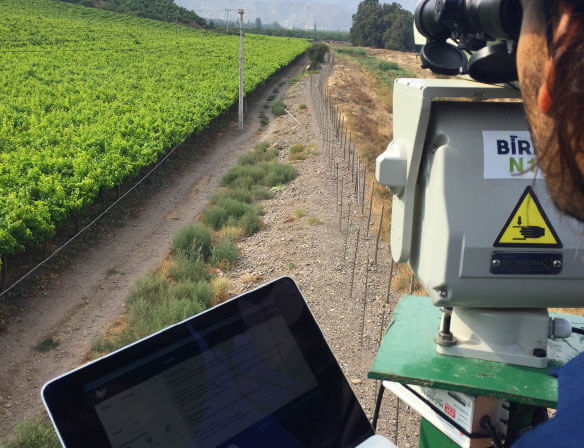 The birds caused a lot of damage to a quarter of the Thompson grapes. They ate around 1500 boxes of grapes per hectare. Especially in the more isolated areas where there is almost no human presence. The rot caused by the bird damage is very serious and a lot of grapes are lost. The grapes can catch fungus infection causing them to keep rotting. Mirko says: “In recent season we covered the harvest with the Autonomic laser bird deterrent and truth is that we saw very little damage in the Thompson grape area, it caught my attention because it looked really good.”

Last year Mirko also tried caps to protect the grapes. “The problem is that the cap is very expensive in terms of labor. We have to put the cap on and off again. The caps cost around $ 40 a piece and you need 40 per vine. There are around 1,111 vines per hectare making the cap solution cost more than $1,500 per hectare, if we don’t protect the grapes from birds, they would eat up to 50% of our grapes.” 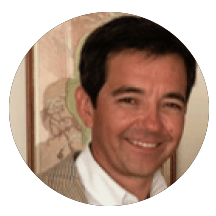 “The birds attack the top and bottom of the bushes. That is why it is important to aim the laser above and below the bushes.”

“The entire season we did not see any habituation to the laser which was the case with other methods. We have tried all kinds of bird deterring methods before but those worked for a couple of days.”

“At the end of the day, I liked the device because it gives me some peace of mind.”